The internet is a marvel of modern technology and a true testament to human ingenuity. But should fingertip access to the world’s digitised information cost you your privacy?

Not according to world-renowned technologist Gary Kovacs, who rightly declares that loss of privacy should not be tolerated as “the price we accept for getting on the internet.”

Unfortunately, the vast majority of digital citizens have either willingly or ignorantly sacrificed their privacy and data—the most lucrative commodity of all in recent years—to the internet’s meddling mega-corporations and the world’s omnipresent governments.

However, the tide may be beginning to turn. Amidst a global crisis where governments and Silicon Valley’s big tech firms collude to censor dissenting voices and push propaganda to the masses, millions of concerned people are becoming more cognizant of their online privacy and bolstering their security than ever before.

To level-up your online privacy, or get away from the Facebook fact-checkers, adopting these five digital tools and practices could pay dividends in minimising intrusion and sneaky data collection to achieve a better, freer and richer online experience.

A Virtual Private Network (VPN) serves as your very own encrypted tunnel to the internet that works by routing all traffic from the devices on your local network via a remote server before heading out into the abyss of the digital ether. Essentially, the VPN acts as your secure slip road into the lanes of the Internet motorway.

Connecting to the internet via such a server, which can be located anywhere in the world, cleverly fools any platforms and services that attempt to determine your location by masking it with the region that the server is situated in instead. Not only does this provide a blanket of privacy by concealing your true location and IP address, but it can also be advantageous in accessing content that is otherwise  restricted to specific geographical regions—streaming services like Netflix are one notorious example

As a bonus byproduct of this process involving encryption, none of the data you send or receive can be intercepted by your Internet Service Provider either as is possible without the VPN. One downside to connecting via a VPN is that your maximum download and upload speed will be reduced due to the additional hops your data has to navigate, but for most users the noticeable effect of this inherent reduction will be negligible, especially when weighed up against the significant benefits it brings.

For the privacy-conscious, a VPN is a must-have accessory in the digital toolkit that unlocks a layer of greater anonymity while traversing the internet in the same convenient fashion that you otherwise would, although it must be stressed that they should be utilised at all times and in tandem with other privacy measures, like those we have suggested here, for maximum efficacy. There are thousands of choices of service providers out there, varying in features and price range, but ExpressVPN and NordVPN are two of the most popular around today.

Statistically, like the majority of typical web surfers, it is highly probable that , one  particular search engine, namely Google, will almost exclusively underpin your navigation of the online highways for everything from shopping, research, browsing social media to watching humorous videos—imagery of cats was obviously what the web was intended for, after all.. However, reliance on  the services provided by any of the web giants such as Alphabet Inc.’s Google comes at the cost of your privacy as their trackers and bots silently follow you everywhere you venture online, logging your every move with frighteningly detailed accuracy. Ever notice that you’re incessantly confronted by ads that somehow seem to relate to a video you’ve just watched or content you have been searching for moments before? Well, this is no coincidence by any means.

Fortunately, these days there are equally viable alternatives to Google, whose priority is maintaining privacy rather than industrialised data harvesting—who would have thought it?—while still providing an impressively comparable level of  convenience and usability as what we’re all accustomed to from the American multinational tech giant.

For example, DuckDuckGo promises to ‘raise the standard of trust online’ by providing a search engine that not only doesn’t track your online activities, but will also actively block such dubious behaviour undertaken by the likes of Google and Facebook. Startpage is an simillarly noteworthy alternative, who describe themselves as ‘the world’s most private search engine’.

It may come as no surprise to many that Google Chrome boasts around 64% of the browser market share across all device platforms  worldwide, a margin not even close to being paralleled by any other offering out there. However, what may be the world’s most popular web browser delivers little in the way of online anonymity. In fact, in spite of its ubiquity, you may be alarmed to learn that Chrome is regarded as the browser currently susceptible to the greatest catalogue of vulnerabilities.

If you wish to seek true anonymity on the web, in the pursuit of hiding your activity online from snooping eyes when you’d least expect it, it would serve as a wise decision to reconsider your choice of internet browser of—perhaps you’ve never even contemplated this before. Tor offers one such browser that enables anonymised communication by conveying all of your traffic in an encrypted form through a robust and complex system of ‘relays’— thousands of servers operated by volunteers arranged in a worldwide network that disguises the origins of communication and user locations intrinsically by its very design.

A free, open-source application based on Firefox, Tor Browser is highly effective in preventing government agencies and nefarious  corporations from monitoring and stalking  you online. Unlike conventional methods of browsing the web, it is impossible for any entities who happen to be surveilling your activity to extrapolate any tangible intelligence beyond the mere fact that you’re using Tor.

Another browser pioneering the future of web privacy and security, Brave boldly proclaims to be redefining the experience of surfing the web. With flavours available for all platforms, desktop and mobile, Brave not only offers a strong line of defense for your privacy, incorporating powerful ad blocking capabilities, a next-generation peer-to-peer protocol for defeating censorship and now even integration of Tor routing, its developers boast of a browser that’s speedier than anything you’ve previously experienced and less draining on your devices’ batteries too. Even DuckDuckGo have released their very own browser, featuring an array of privacy features to compliment their search engine.

A Faraday bag is a portable pouch that blocks radio waves in their tracks from reaching or leaving the confines of the mobile device inside. It’s the equivalent of placing your electronics inside a microwave. Give it a try if you haven’t already—but please, for the love of Autarki, don’t turn it on! (A tasty, warm beverage is unlikely to be the outcome, we can assure you.) For those of you as paranoid about privacy as Edward Snowden himself, storing your smartphone in a Faraday bag while on the move effectively renders it undetectable and shielded from even the most elaborate of remote hacks as it’s comparable to being in an isolated location with no cellular reception to speak of—we’re all too familiar with that scenario at the worst possible moments.

Everything from GPS to Bluetooth is simply no match for one of these deceivingly unassuming textile cases, meaning your phone can’t serve as a covert tracker or listening device for the intelligence agencies that we all know and love (you can take that as a compliment, GCHQ), nor is it possible for opportunistic hackers in your vicinity to retrieve, wipe or otherwise tamper with your phone’s data over the airwaves. What’s more, Faraday bags are reasonably affordable and widely available online in a myriad of designs that surprisingly don’t stand out as a sci-fi contraption like you might expect.

As the owner of 40% of social media platforms, Facebook has an alarming amount of control and influence over what internet users see, say and do while online.

Through intrusive algorithms, Facebook invasively serves content to users irrespective of what the user wants to see. Moreover, Facebook’s fact-checkers patrol its social media platforms penalising users for ‘wrong think’. Censorship online is a surging problem amidst an international crisis where scepticism of governments’ actions in digital public squares such as social media is sorely needed.

If you’re weary of Facebook fact-checkers and the shady influence of Zuckerberg and Co—we know we certainly are—there has never been a better time to take a leap of faith and join an online revolution in social networking.

Countering the rising tide of censorship and dangerous data-harvesting practices, there are many smaller, independent social networking sites available to those seeking a better online experience.

Autarki Social is one such social network, guaranteeing its users a social media platform free from intrusive algorithms, data-harvesting and unrestrained censorship. In the words of our motto, ‘it’s the way social networking should be’ and nothing more; that’s our promise and it doesn’t have a hidden expiry date.

The internet is part and parcel of daily like in the 21st century, but that’s not to say the right to use the internet should come at the expense of privacy and free expression. Take the steps mentioned above today to bolster your online privacy so that you can enjoy all that the internet has to offer, including its many forums for reasoned, honest discussion.

Are you worried about the dangers posed by Big Tech? Then you’re not alone. According to one US study, 86% of adults said they are…

“How dare you think for yourself! You must be one of those conspiracy theorists the news keeps talking about!” “Why would you even challenge what… 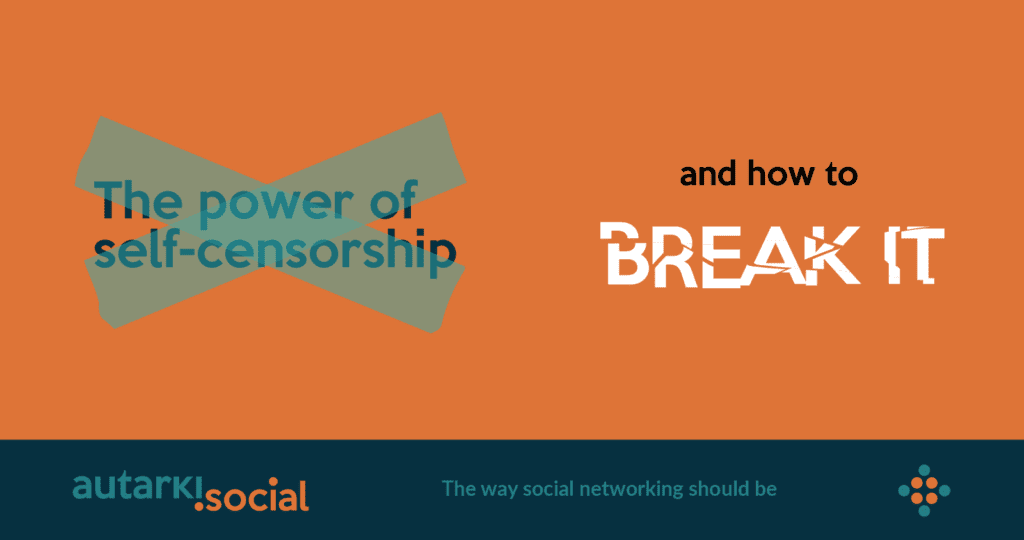 Do you ever repress your true thoughts and feelings because you’re worried about the consequences? Then you’ll understand the power of self-censorship all too well.…

Cancel reply
Five Ways to Level Up Your Digital Privacy

Please confirm you want to block this member.

You will no longer be able to:

Please note: This action will also remove this member from your connections and send a report to the site admin. Please allow a few minutes for this process to complete.

You have already reported this
Clear Clear All